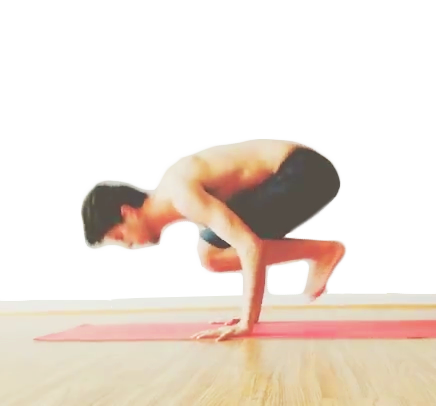 How to Jump back and Jump through

Vinyasa means ‘carefully ordered.’ It refers to the sequence as a whole, since each movement has been carefully choreographed. It also refers to the connective tissue between each pose, which is the subject of the following discussion. The vinyasa between poses is the middle section of the Surya Namaskar form (Sun Salutation): catvari (chaturanga); panca (urdhva mukha svanasana); and Sat (adho mukha svanasana.)*

The vinyasa is performed between each pose and between the right and left side of asymmetrical postures. If time or energy must be budgeted, it is also acceptable to only take vinyasa between postures but not between sides. If you choose not to take vinyasa between sides of every posture, it is still a good idea after deep twists, such as Marichyasana D, or any pose where you feel like you would benefit from a ‘reset.’

If you have reached the seated poses, you are already well familiar with the Surya Namaskar form. The main challenge is the transition from the posture to catvari, and from Sat to the next posture. These actions are often referred to as ‘jumping back’ and ‘jumping through.’

Jump back: “jumping back” is something of a misnomer because the action isn’t accomplished by jumping, but by tucking crossed legs as close to the torso as possible, with the knees near the shoulders, rounding/flexing the spine, lifting the body with the strength of the shoulders and the engagement of uddiyana and mula bandha and leaning forward in this tight package until the legs are positioned behind you to release into chaturanga.

Jumping through can be accomplished with either straight legs or with legs crossed and tucked close to the torso like in the jump back. The cross-legged variation is typically easier, but not always. A minority of practitioners, due to their proportions, find jumping through with straight legs easier.

Cross the legs and make a tight ball as you push off the floor and bring the hips forward. Press off through the straight arms and stay as high and tucked as you can. Before landing, with spine flexed and bandha engaged, straighten the legs and come to a seat. Jump at the end of an exhalation from adho mukha svanasana after bringing the knees as close as possible to the chest. An exhalation also encourages engagement of the muscles of the abdomen and pelvic floor.

In the case of straight leg jump throughs, it’s important to remember that the legs are longer than the arms so in order for the legs to get through the arms you must be able to keep the heels lifted off the ground (dorsiflexion of the foot) until the legs are close to parallel with the floor. As you jump, the hips will have to lift high. From adho mukha svanasana, bring the knees close to the chest, lower the hips and keep the legs and shoulders engaged and lifting as you exhale, look between your hands and jump forward.

When jumping either back or through with crossed legs, be sure the feet & toes are pointed out to the sides. Flexed feet get stuck easily on the ground, which equals crashing.

To work on vinyasa, follow these 5 stages. You will likely need at least 6 months to a year to learn all the stages. Don’t get discouraged! If you practice every day you’ll gain strength quickly.

First: from a seated position, cross the legs, rock forward onto the feet and place the hands down in front of you. Stand up part way and jump the feet back. From Sat, step or hop into a cross-legged position, bringing the right foot to the left wrist and the left foot to the right wrist, then sit down. Make this your vinyasa between poses, while you work on the following exercises. Over time, you will be able to incorporate the following techniques that require additional strength and coordination if you wish.

This method is also great for practitioners who want to take vinyasa but have a mild wrist or shoulder injury that makes lifting up fully infeasible.

A video posted by Ashtanga Yoga Room (@yogawithgriffinamelia) on Apr 1, 2016 at 2:34pm PDT

To start building the strength to lift and jump, try repeating the following exercise 5 or 6 times daily. These exercises are best performed during a “break” from the regular sequence, perhaps at navasana, rather than between sides of postures.

Training the ‘tuck’ with blocks. (Lolasana)

After a period of practice, you will be able to jump forward and back on blocks.

A video posted by Ashtanga Yoga Room (@yogawithgriffinamelia) on Apr 1, 2016 at 2:01pm PDT

Tip: Practicing with socks can help you slide if you practice on a wood or slippery surface. That will allow you to feel the fluid, floating motion, rather than getting your feet stuck on a sticky mat.

After working with this for a while, try without the blocks. The feet still get stuck, but you can hop back. Think of it as a two-part jump back: from seated to halfway back, then another jump to catvari.

A video posted by Ashtanga Yoga Room (@yogawithgriffinamelia) on Apr 1, 2016 at 2:05pm PDT

Next—after a couple months, perhaps—use the blocks again. This time, use your additional strength to lift up a bit higher and jump all the way back without touching down mid-way.

A video posted by Ashtanga Yoga Room (@yogawithgriffinamelia) on Apr 1, 2016 at 2:09pm PDT

The final step is to jump back smoothly without the blocks, either curled in tightly or with the legs straight. Remember, slow & controlled movement, not smashing down. If you’re trying with the legs straight, be sure you keep the toes flexed and the hips lifted so you don’t stub your toes.

A video posted by Ashtanga Yoga Room (@yogawithgriffinamelia) on Apr 1, 2016 at 2:14pm PDT

And that’s it! There are various stylistic interpretation of the vinyasa depending which pose you’re jumping into or out of, but with this foundation you’ll be well prepared for any variation.

When using props: blocks can be used as props while building strength and getting used to the motions of tucking, lifting and tipping forward in quick succession. Blocks should be placed directly at the outer edge of the legs directly in front of the hips (mid-thigh), and not further away from the body. If blocks are placed too far away from the sides of the body, the arms and shoulders lose their advantage of providing length to lift the torso between the arms. If the blocks are placed directly next to the hips, your center of gravity will not be balanced and it will be more difficult to lift your feet. Leaving blocks under your hands while you jump through can also provide additional lift. Depending on your level of strength and the proportions of your arms, legs, and torso, some of these actions may be more difficult than others. Spend extra time working on the hardest actions.