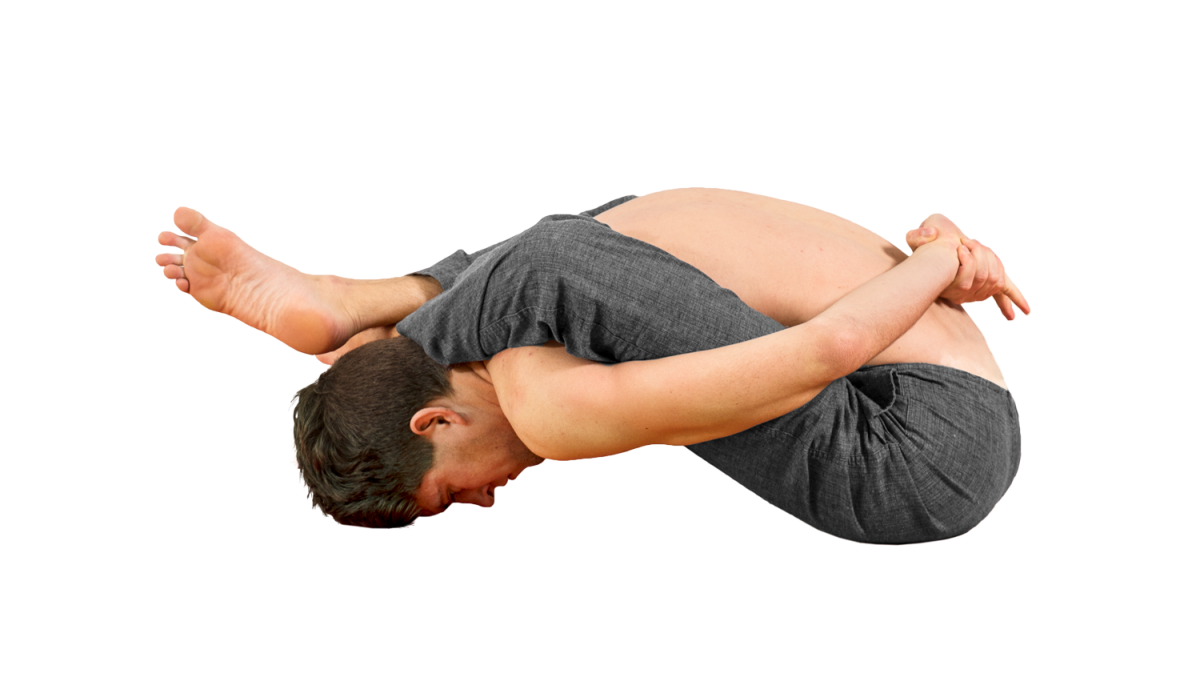 Supta Kurmasana is the twenty-first pose of the primary series, and the sixteenth seated pose. This is the third pose of what is often called the “apex” of the Primary series—five challenging asana in the middle of the sequence.

Supta Kurmasana is the deepest forward fold of the Primary series. It has several manifestations. The first two forms described here can be perfected during the course of learning the Primary series. The final form, with both legs crossed behind the head, is best added after some degree of competency has been gained with the Intermediate series. Inability to put the legs behind the head should not be a bar or disqualification to learning the full Primary series and beginning practice of the Intermediate.

From all forms, EXIT CAREFULLY. The same holds true for any pose. This asana, with deep spinal flexion, plus a bind, and potentially with the weight of the feet on the head, can be dangerous if you exit haphazardly, let the hands or feet pop apart, or do not pay heed to what is happening in your body.

This form is an introduction to the pose. It starts to establish the necessary patterns, and will be outgrown within a few weeks or months of consistent practice. It does not require shoulder mobility, and the position of the arms inherently limits it; the arrangement of the upper arms will prevent deep flexion. Once sufficient flexibility has been gained, therefore, this form must be abandoned.

From Kurmasana, sit up just enough that you can bring the feet together. Press the heels together firmly, and point the toes out to the sides. With the arms woven beneath the legs, grasp over the tops of the feet and pull, as if twisting the throttle of a motorcycle. The feet should be a middling distance from the pelvis, such that they are beneath the head. Fold forward deeply, tugging with the arms, and reach the head to touch the heels; or work towards that eventuality. Hold for five or more breaths, then sit up and take Vinyasa. 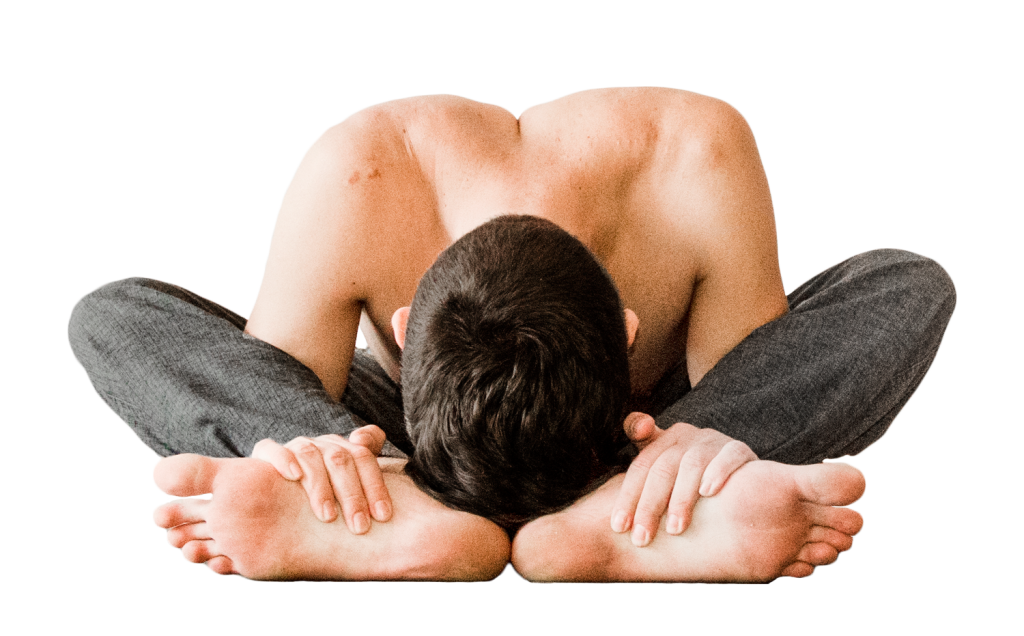 From Kurmasana, sit up just enough that you can wriggle the feet together. Keep the arms angled away behind you. With the head on the ground inside the heels, walk the right foot on top of the left, so that the ankles are crossed. Exhaling deeply, reach the arms back, then wrap them around the legs, across the lower back, and bind the hands together. Keep the feet actively pulling against one another, toes spreading. Hold for five or more breaths, then sit up and take Vinyasa. (Lift through Tittibhasana if desired) 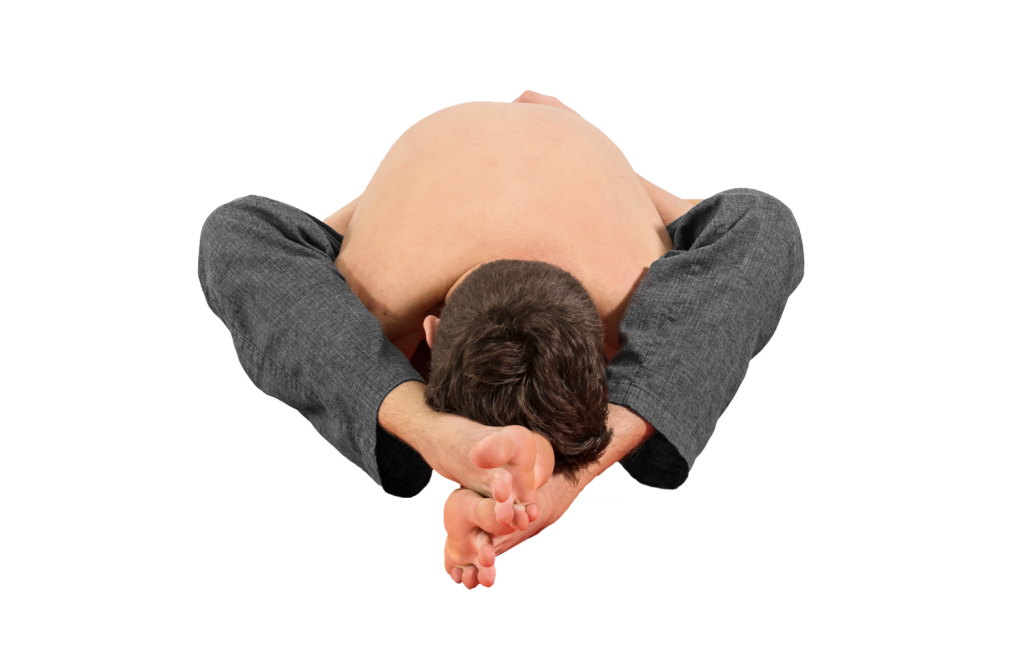 This form is appropriate for those who can put both feet behind their head with relative ease. It should be added after the practitioner has developed competency with Intermediate series through Yoga Nidrasana.

From Kurmasana, sit up just enough that you can wriggle the feet together. Keep the arms angled away behind you. With the head on the ground inside the heels, lift the left heel and place it behind the head. Next, lift the right heel and cross it behind the left. Use the power of your legs to do so, keeping the hands on the ground behind you. Bind the hands together behind the back. The legs should cross over the neck, as low as possible, not the head. 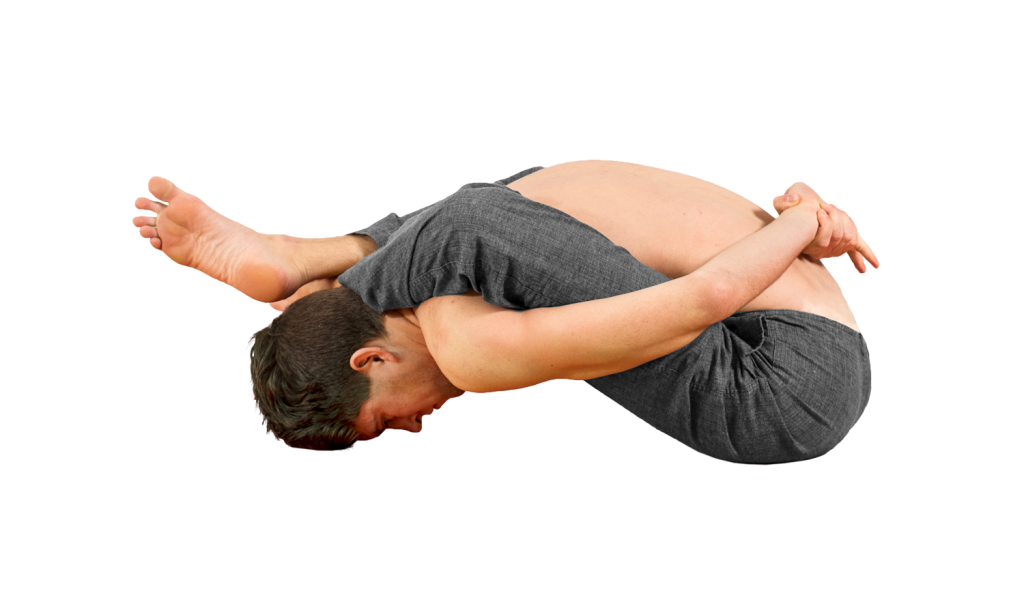 Five breaths here; this is the state of the pose. 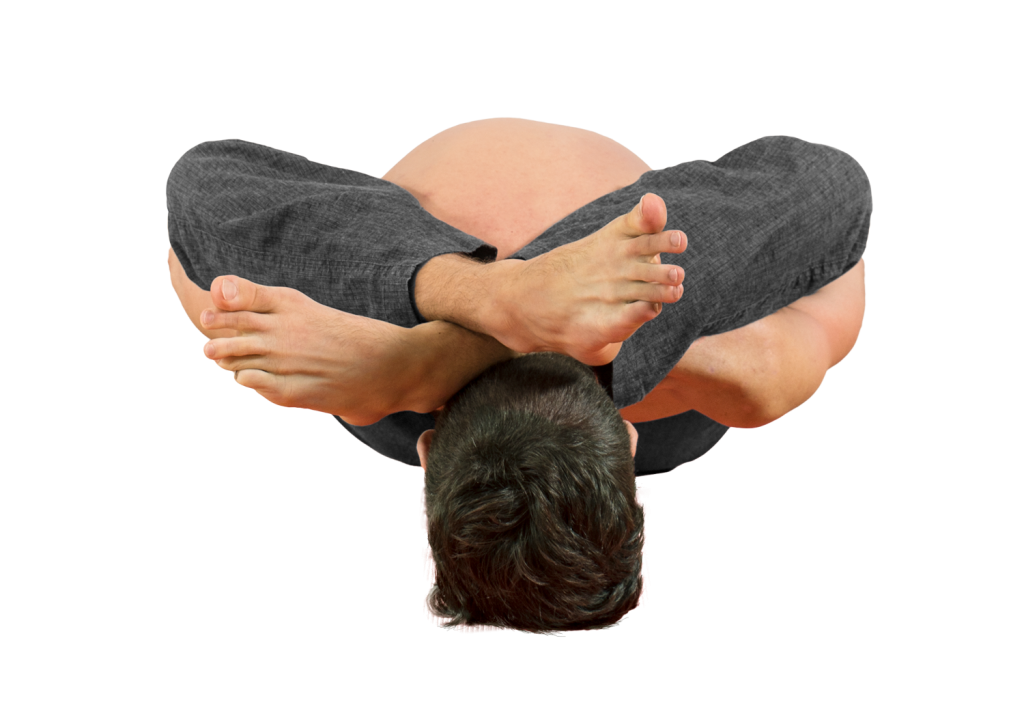 Now, exhaling, unbind the hands and place them to either side of the heart.

Inhale, lift up. As your arms straighten, unbind the feet to come to Tittibhasana. 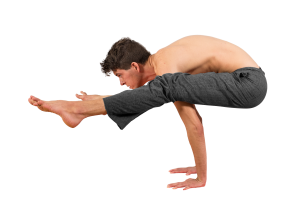 Exhale, jump back to catvari and take vinyasa.

Alternative entrance: From Kurmasana, sit up and place the legs behind the head (using the hands if needed) as in Dwi Pada Sirsasana. Then, slowly lower yourself, using your hands, until the forehead touches the ground. Snake the arms back to bind behind the back.

If none of the above stages is accessible to you, it is best to revisit the previous forward folding postures until the requisite flexibility develops.

As an intermediate exploration between the Primary form and the leg-behind-head version, try placing the crossed ankles on a block or bolster, then placing the head on the ground just inside the heels.

If the bind is close, but the hands don’t quite come together, use a strap or washcloth to bridge the gap. Walk the hands closer and closer until they meet.

Do not be too ambitious here. For the final form, Dwi Pada Sirsasana and Yoga Nidrasana should be comfortable. Otherwise, this position will exert a great deal of force on the neck and lower back and can be uncomfortable or injurious. Until that point, be content with the Primary form of the posture.

As with any asana, collapsing or flopping into the posture will not serve you well.